Quiver Trees of the Kalahari

Quiver Tress of the Kalahari

If you have never heard of the quiver tree (Aloidendron dichotomum) then I am more than delighted to take you on this magical glimpse into a tree of the past and future. The quiver tree is part of the aloe family and recently given a new genus which includes tree succulents. This very old and unique aloe goes far back into our history.

Quiver trees are predominantly found in the Northern Cape province of South Africa and in Southern Namibia. The landscape which they call home is rather arid and desolate in many ways. Very few species thrive under these conditions while this species has lived there for hundreds of years and unknowingly becoming an important part of the progression of people. The local San people refer to the plant at Choje and in Afrikaans, it is called a kokerboom. The English name is derived from the fact that the San people use the hollowed-out tubular branches to make quivers for their arrows. Then we have the Sociable Weaver, which is perhaps one of the more fascinating birds. These small birds live in colonies and build large nests where they live as a small ‘bird society’. They make their huge nests on large stable structures like trees and sometimes telephone poles. However, one of their favourite trees is indeed the quiver tree. I feel that it is an absolute delight to be able to have the chance to see these birds in action, especially with such a historic tree. 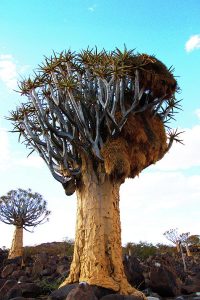 Due to the fibrous nature of the trunk, the dead ones were hollowed out and used to store food in so they would remain fresher for longer. A beautiful specimen thriving in the middle of a vastly arid landscape that has the ability to act as a natural ‘refrigerator’ of sorts. I think it is rather spectacular how it has been able to help all the travellers and residents of the area for so long.

Though the quiver tree is not done helping us just yet. In its centuries of existence and giving so much to the animals and people of the land it gives us a peek into the future. In recent years it has become apparent that the quiver tree may be able to give information on climate change in protected areas.

The animals and plants that live in these areas live together in a brilliant symbiosis and have given much to the past inhabitants, settlers and future generations. Let’s celebrate these trees and the life surrounding them. 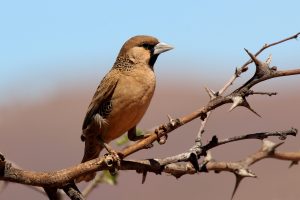